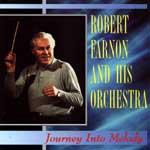 Several hundred hours of effort have gone into this new edition of the Robert Farnon Discography but, apart from these first few pages, much of the credit for its existence is due elsewhere as, in truth, I have merely compiled and re-arranged the earlier labours of others.

Prime among these was the late Michael Maine, editor of the pre-computer age 1977 edition, and his team of researchers. Since then David Ades has produced numerous supplements which are incorporated here and further information has been gleaned from the pages of the Society's magazine Journal Into Melody.

The late Don Furnell was responsible for the onerous task of checking and amending the information in the draft print-outs from the database and for proof-reading the final results, other than the Chappell entries which were verified by David Ades.

Alan Bunting - July 1996
We can no longer accept updates for the Discography
- unless it's your intention to create any further versions of the Robert Farnon Discography.