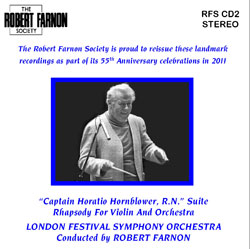 The Robert Farnon Society is proud to be making available again an important 1959 recording, originally issued on a British LP in 1960. It features two works which proved to those familiar with his short cameos such as "Jumping Bean" and "Portrait Of A Flirt" that Farnon was capable of composing more substantial works when the occasion arose. Robert Joseph Farnon was born in Toronto, Canada, on 24th July 1917. While still in his teens he became a familiar name on local radio, but he wanted to move away from the popular music that was paying the bills and spent three years working on his first symphony, which was premiered on 7th January 1941. A second symphony followed a year later, but the Second World War interrupted his plans and, in 1944, he arrived in Britain as Captain Robert Farnon, conductor of the Canadian Army Band.

He remained in Britain after the war and found himself in demand for radio and television broadcasts, the composition of production music, numerous commercial recordings and film scores.

Following the termination of his exclusive contract with Decca, he conducted a large number of top session musicians and players from leading London symphony orchestras for these recordings under the title ‘The London Festival Symphony Orchestra’.

Robert Farnon died on Guernsey on 23rd April 2005 aged 87. The two works on this CD are fine examples of his mastery of composition and orchestration, but they represent only a fraction of the considerable body of work he accomplished during his lifetime.

In 1951 Warner Brothers commissioned Robert Farnon to compose the score for their major British feature "Captain Horatio Hornblower, R.N." starring Gregory Peck and Virginia Mayo. The subject was an exciting sea story in the finest swashbuckling tradition and it gave Farnon on the opportunity to indulge his passion for writing music descriptive of the sea. To get himself in the right mood he spent several weeks on the south coast of England soaking up the atmosphere, in much the same way Debussy had done many years earlier when composing "La Mer".

This suite (prepared by Farnon several years later) is faithful to the original soundtrack score. It requires a large symphony orchestra, with added French horns and brass, and this is evident from the very beginning with the dramatic main theme.

From this develops the beautiful flowing melody descriptive of Hornblower’s frigate "HMS Lydia".

The third movement begins with the theme for Hornblower’s servant Polwheal, based on the traditional British naval air "Portsmouth". This proceeds to the main love theme for "Lady Barbara" which Farnon used later as a separate orchestral work. The final movement covers the exciting battle scenes against the French, with the Lydia theme emerging triumphant.

Robert Farnon conducted the Royal Philharmonic Orchestra in a later recording of this suite in 1991, but many admirers still regard this 1959 one as being preferable.

Rhapsody for Violin and Orchestra

This Rhapsody is regarded by many of his admirers as the finest of Robert Farnon’s more serious works. It was commissioned by the BBC and received its first performance (in an abridged version) at London’s Royal Festival Hall on 7th June 1958 as part of the BBC’s Light Music Festival, an annual event for many years. It was written especially for Raymond Cohen (1919 - 2011), and was premiered by the BBC Concert Orchestra, conducted by the composer. In 1959 Mr. Cohen made the first recording of the entire work, which was also widely performed and recorded by the Canadian Steven Staryk. Shortly after the Second World War Raymond Cohen entered, and became the first winner of, the prestigious Carl Flesch International Violin Competition. He went on to establish an international reputation as a soloist, playing with eminent conductors and orchestras all over the world. In 1959 he was invited by Sir Thomas Beecham to be his concertmaster and solo violinist, a position he held with distinction for six years. He had a long association with Robert Farnon, being his leader and solo violinist for recordings and concerts for many years. He played a Stradivarius violin dated 1703. In August 1991 Robert Farnon and Raymond Cohen made a further recording of the Rhapsody for an American record company, but it is generally accepted that the original recording, which we have here, is the definitive version.