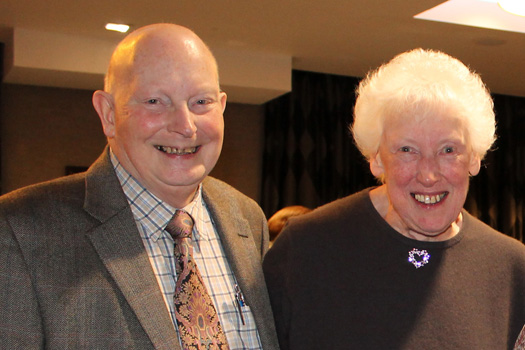 Moira hailed from Forest Gate, London, the first of two children born to Andrew and Ellen Stevenson. During World War Two, the children and their mother evacuated to Dorset,  where Moira grew to love the countryside. At the end of  hostilities, the family was reunited  and they moved to Leigh-on-Sea, Essex. Moira attended the local Junior and High Schools and the age of nine, she first met her future husband, David Ades.

Throughout her life, Moira was seriously afflicted with chronic asthma, and her education was badly disrupted as a result of this condition. Upon leaving school, and after several different jobs, she ultimately became a book-keeper for her father, continuing in this role until her marriage to David in 1967. Around this time, David gained a promotion within Midland Bank, which necessitated a re-location to Northamptonshire, and it was there in 1968 that their only child – a daughter, Fenella – was born.

Moira believed that some of the most beautiful things in life came from nature. She loved sunsets, flowers, trees and animals. She also had an artistic eye, and inherited a love of antiques from her
father, building up her collection as-and-when funds permitted. Along with David, she enjoyed good food and  wine, and particularly in later years, travelling.

The family moved several times ‘with the job’ and eventually settled in Nottingham. In 1989, David was able to secure a very generous retirement package, and they decided to live in the South-West, which Moira remembered fondly from her childhood. Their beautiful new home and garden in Seavington St. Michael,  Somerset, occasionally played host to members of the Robert Farnon Society for ‘extra’ meetings  during  the summer.

Moira soon became involved with local voluntary work, including helping to raise funds for a new Village Hall.  She was always very supportive of David, both in his professional life and in his ‘second career’ after  retirement, when he ran the RFS and also acted as consultant for many CD projects, including of course his stewardship of the ‘Golden Age Of Light Music’ series for Guild Records.

For many years, Moira accompanied David to the London Meetings of the Society, where she could usually be found  helping out ‘on the door’. She was always very welcoming,  especially to those attending for the first time, and her wonderful smile and cheerful disposition will be remembered with much  affection by many.

Although in declining  health herself, Moira continued to be a tower of strength for David as his own illness progressed through to its unfortunate final stages.  After his passing, she spent a great deal of time with her daughter’s family, and was looking forward to moving into a specially constructed annexe attached to their house.

As previously reported, Moira was admitted to hospital in mid-December 2015 for a surgical procedure. Whilst this initially appeared to be successful, she then developed post-operative complications which her medical team were unable to resolve, and she sadly passed away on December 27th.

A  loving and caring wife, mother and grandmother, Moira also became a good friend to many of us in the Robert Farnon Society; her passing, especially so soon after David’s, has left a huge void and she will be greatly missed. Once again, our sincere condolences are extended to Fenella and her husband  Barry – and her two grandsons James and William.