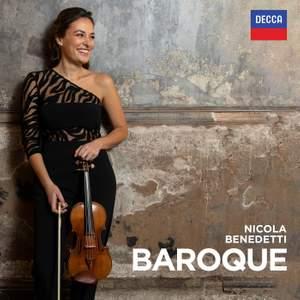 It was not my intention to review this album here but then I read what Nicola Benedetti had written in her introductory notes, that "Many find it (the Italian baroque) light fare: too populist, repetitive and predictable." So maybe, putting these descriptions aside, it will appeal to our reader.

Scottish-born with Italian parentage, Nicola has a big following as one of our leading violinists with a CBE, "For services to music", as well as a Grammy award. Her Benedetti Foundation aims to showcase what music education at its best can look and sound like.

This album is her first period performance release, gut strings et al, which her recording company is very excited about. She does not play with a full band but is joined by her own recently formed Benedetti Baroque Orchestra comprising four violins, two each violas and cellos, double base, lute and harpsichord – all freelance specialist baroque players.

She has chosen four of the over 500 concerti written by Antonio (Four Seasons) Vivaldi (1678-1741). The album opens with a knock-'em-in-the-aisles version of that era's great violinist Francesco Geminiani's (1687-1762) Concerto grosso 'La Folia', a reworking of his teacher Arcangelo Corelli's (1653-1713) Violin Sonata, one of the oldest western classical themes.

The playing throughout, led by the superb Nicola – on a £6.3 million Gariel Stradivarius (1717) – sounds full-bodied rather than light, 'though the music is undoubtably tuneful and bright; so much so I would have liked quite a lot more than under an hour from a premium priced disc.

My verdict, then, is that the album is a lively listening experience, as undemanding as you want it to be, that need not frighten the light music enthusiast considering adding it to their collection. You can get a 10% discount for a first order, plus postage, from the Decca Records Shop online.