French composer Léo Delibes (1836-91) is entitled to be reviewed here as he was blessed with a natural gift for likeable, easily assimilated melodies: his music being described as having “charm, elegance, wit and grace”.

Having reviewed three previous albums by this orchestra and conductor – ‘Overtures, Preludes & Intermezzi’, ‘The Fellini Album’ and ‘Cherubini Miniatures’ – I have become something of a fan and welcome this new release; even although it does come into competition with John Wilson’s recent highly acclaimed versions of the two main works: Fountains of Rome and Pines of Rome (also previously reviewed here).

THE NDO PROJECT – a short history and a review of its latest CD release , 'Autumn Leaves' 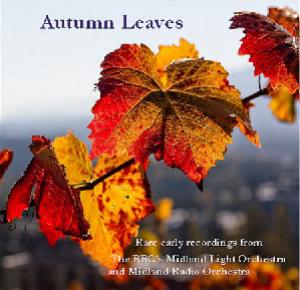 More than fifty years ago, many recordings were made [unofficially and privately, and often off-air] – by studio technicians, orchestral players and production staff – of a BBC 'house' orchestra in Manchester.

The Magic Of Mantovani

When as a long time Mantovani admirer I first joined the Robert Farnon Society, his name was hardly ever mentioned. It seemed to me that he was thought of by my fellow light music enthusiasts as being too “popular”, much as some people now think of André Rieu.

Regular readers will know from my review of ‘Little Women’* in February this year that I regard Alexandre Desplat as second only to the great John Williams as a composer in the world of film music. Following that earlier album, we now have this further welcome selection of his work.

This is a pleasing surprise follow-up to Great Classic Film Music (ARIADNE 5006), the virtues of which I extolled in 2019. The track selection here is noteworthy for being less hackneyed than in many of the comparable albums in the catalogue.

In June 1958, when distinctive pianist André Previn (“Piano Magic”) met David Rose with the 25 “Lush Strings” and rhythm section of his orchestra, they got together and produced a Billboard top 20 LP: ‘Like Young: Secret Songs for Young Lovers’. Nearly two years later there was a follow-up album, ‘Like Blue’. Both have now been released on this exceptionally well-filled stereo CD remastered by Robin Cherry.

Deep in a Dream

Impressed as I was with these arrangements, there was something else he produced for which I shall be eternally grateful - The Reg Owen Arranging Method of 1956. It’s the best one of its kind easily outdoing many other big name manuals on how to orchestrate. Owen covered every aspect of arranging from the smallest combination to a full orchestra. Each instrument was thoroughly defined, including its range. His coverage of the subject was so complete that the book became my bible of music. If it hadn’t been for Owen, I would never have been so well informed and given the incentive to be an arranger.

He is mostly remembered as a ‘one hit wonder’ because of his 1958 best-selling recording of Manhattan Spiritual. His excellent film scores were also very much part of his career.

One of his non-dance band arrangements was an early 1938 Jimmy Van Heusen ballad called Deep in a Dream played by a studio orchestra in 1960. It’s a very apt title given its ethereal quality with good lyrics by bandleader Eddie DeLange. First to greet the ears are the unmistakable sounds of Flamingo even though it hadn’t been written then. A “Gordon Jenkins” type tempo accompanies a horn in a lazy start with a hint of A Nightingale Sang in Berkeley Square. This quite predictable melody creeps along at a snail’s pace sliding on to very basic chords. Time for the irresistible strings to make an entry which they invariably do. Like most arrangers who adore them, Reg Owen always kept one eye on the main chance ready to feed them in.

“Then from the ceiling, sweet flutes come stealing” giving the bridge a little stressful undertow with pizzicato strings, while taking us gently back to the main tune. Once again strings are the thing as we wander among the flamingos waking up from our serious siesta.

This is the release we have been waiting for: some of the very best of the kind of music we love the most. It is the second instalment in a series from our friend John Wilson, of whom it has been said that what he does not know about Eric Coates’ music is probably not worth knowing.

This is quite a discovery: an album of melodic well-fashioned light classical music from a composer I have heard of but know nothing about, played by an orchestra and conductor whose names I have not even come across before.

80 Years of Music While You Work